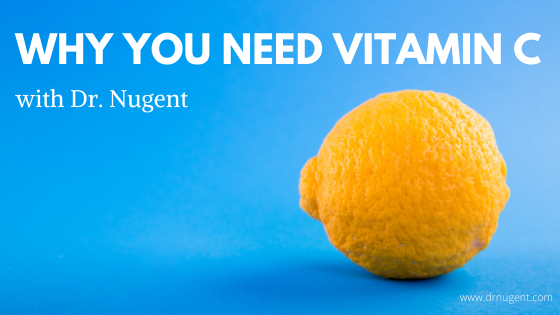 One question I am constantly asked is, “should I take vitamin C and if so, how much? As I have mentioned previously in the Nugent Report, absolutism seems to be the default setting for the majority of people. That is to say, something is 100% effective or it’s 0% effective. That is almost never the way it works in health sciences. The sale of vitamin C across not just the United States, but the world is actually causing many companies to completely exhaust their supplies. So, among the people who think vitamin C has important health supporting properties they can’t seem to get enough. Everyone should understand that even too much clean water consumed over a short period of time can be lethal, yet water is essential to life. Vitamin C is also essential to life, but you can get too much of a good thing.

How does vitamin C work and what does it do?

What is an essential nutrient? In science, essential refers to a nutrient which cannot be produced by the body, but the body absolutely requires for normal healthy function and even survival. Vitamin C is an essential vitamin for humans that has many functions beyond supporting the immune system or being an antioxidant; it is also a co-factor for a variety of enzyme processes called biosynthesis.

Biosynthesis is a complicated enzyme-catalyzed process which is essential to your health. In simpler terms, this process takes simpler materials and converts them into more complex materials. Another way to put it is turning smaller simple molecules into bigger more complex molecules. Vitamin C is essential in this process. Vitamin C is also essential to gene regulatory enzymes. Wow, I’ll bet you had no idea how important vitamin C was, you probably thought it was just for the immune system.

Vitamin C’s contribution to immune support is extremely important regardless of a person’s state of health. Vitamin C is known to support the innate as well as the adaptive immune system. According to Carr and Maggini (2017), It also supports epithelial barrier function. I’ll give you more information in the Nugent Report later, on the epithelial barrier.

Vitamin C accumulates in phagocytic cells, such as neutrophils, and neutrophils are the cells that you need in healthy numbers. Because of vitamin C’s mechanism involving phagocytic cells it can potentially enhance chemotaxis, and phagocytosis, which could ultimately lead to the generation of reactive oxygen species. (1) Oh gosh, more complicated science… I promise you that The Nugent Report will always take complex science and put it into simple terms that you can understand so don’t panic.

Let’s start with phagocytes. The word phagocyte comes from a classical Greek word phagein meaning to eat. You might think of a phagocyte like the Pac-Man character from the children’s videogame. Phagocytes literally engulf foreign material like Pac-Man. The whole process is pretty complicated but in simple terms this is the image you should keep in your mind. Although in an absolutely technical sense a cell like an amoeba also qualifies as a phagocyte, in immunology, the word phagocyte refers to white blood cells. That’s a term I know that you’re all familiar with. White blood cells are your body’s response to immune challenge. The phagocytes  and neutrophils are something that you will routinely see on your blood work when you get your annual physical exam.

The process by which a phagocyte does its job is called phagocytosis. Phagocytosis has five steps, (some textbooks teach four steps), it just depends on how you interpret the steps.

Step one, phagocytes activation by specific mediators which include many things made by the body such as peptidoglycans, complement proteins cytokines or prostaglandins.

Step two is called chemotaxis. The easy way to explain it is to think of this as guiding the phagocytes to the bad guy cells that need to be eaten. As I oversimplify this, I can just imagine some university professors losing their minds, but my job is to take the complex and make it understandable and useful to my subscribers. The purpose of The Nugent Report is not to impress you with how much I know, but rather to help you learn more that can benefit your health.

In step three the phagocyte has now found the enemy cell and attaches itself to it using an immunoglobulin G (IgG) receptor. I will speak about immunoglobulins in a separate Nugent Report post. Suffice it to say IgG is your most important immunoglobulin for your immune system.

In step four the phagocyte engulfs or ingests the enemy cell.

In step five the enemy cell is destroyed. Yes, oversimplified but this should be very understandable for everyone.

Vitamin C is also needed for apoptosis and clearance of the neutrophils that has been used up from sites. (1,2,3)

Apoptosis is another term derived from ancient Greek; apoptosis means falling off. All cells in multicellular organisms have a programmed time for cell death and that’s what apoptosis describes. You want your immune system to kill invading cells as quickly as possible.

Let’s be clear however, that although vitamin C is essential for all the functions, I just mentioned it is not a medication, it is a nutrient essential to support a wide range of bodily functions. Ultimately those involved in “alternative medicine” often think of nutrients as medicines and this is scientifically false. The human immune system responds to immune challenges and yes of course all cells require nutrients to perform the functions for which they were designed but ultimately it is the immune system not the nutrient that gives you the final result.

Yes, please do support your immune system in the most sensible ways possible, but also be clear that no dietary supplement product is going to be the answer for any immune system challenge.

I take vitamin C every day as part of a very potent multiple vitamin. I do this because I know that many systems of my body require vitamin C every day and the more stress your body is under the more fuel it requires to function under that stress. Human blood study also reveals that most people are not getting sufficient vitamin from diet alone. (4,5,6)

Different governments have established different daily minimum requirements for nutrients. Yes, all human beings have the same basic biological requirements, but some governments believe that their food supplies or food sources afford better levels of certain nutrients than perhaps are seen in other countries. It’s really not worth arguing about, the rules in each country are the rules.

For me I go with the basic biological requirements, because I can’t depend that everyone will be consuming the healthiest possible diet. Depending on age and gender you should be taking anywhere from 65 mgs for teenage females to 90 mgs for adult males, with two notable exceptions, males typically require more vitamin C than females. So, the numbers I’ve just given you would be under normal conditions for daily support, smokers should increase their minimum vitamin C daily intake by an additional 35 mg, or better yet stop smoking. Nursing adult females have the highest minimum requirement because they need vitamin C for two. That’s a minimum of 120 mg vitamin C each day. The safe upper limit of vitamin C is considered to be 2000 mg daily.

In summary, vitamin C is an essential vitamin that means your body cannot make it on its own and it must be obtained from an external source. Ideally that would be diet, however not everyone gets all the nutrients they need from diet alone as scientifically documented. (4,5,6) It is generally accepted that the safe upper limit of daily vitamin C supplementation is 2000 mg. Could there be some circumstances where someone might go higher? Some doctors do recommend going higher but that’s between those doctors and their patients. My job is to stay objective with the data which has been credibly shown to be accurate.

Support your immune system through the best possible diet, exercise, and get a good night’s rest– which is an entirely different subject I’ll be talking to you about on The Nugent Report in the future. That’s uninterrupted, quality sleep between seven and nine hours I’m talking about, not just being in bed. Good sleep is essential to healthy immune function make no mistake. Exercise also improves your immune function. Make sure that you are getting at least the minimum daily requirement of vitamin C and know that the recommended safe upper limit of vitamin C is 2000 mg a day.

Be safe, be sensible, be objective.