What is Muscle Testing? 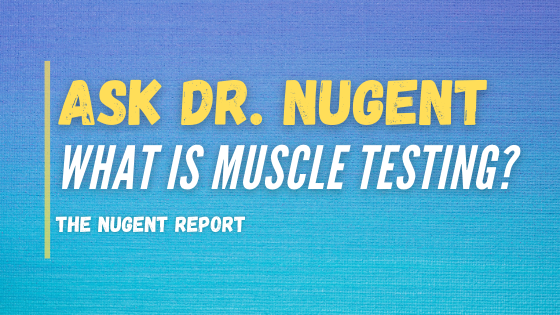 Recently I’ve been receiving questions about a practice known as muscle testing. There are different “gurus” who each have their own method of muscle testing that they claim is the only truly accurate one. Some natural practitioners who use muscle testing have studied the various methods and some have not, they just wing it. There is no standardization under “muscle testing” and standardization is one of the most important steps for any diagnostic tool.

Many who see the words “muscle testing” and are compelled to read on have already experienced it as a patient/client or are themselves practitioners. However, if this is new to you then a brief explanation is warranted. With the exception of one method which I will discuss shortly, in almost every case it involves one person (usually a practitioner) applying a downward pressure to someone’s arm while the person tries to resist that pressure with one arm and hold a supplement, herbal, food, etc. in their opposite hand.  The practitioners goal and the patient’s hope is that the electrical circuitry between the electrical charge of the object being tested whether it’s a supplement, food, or whatever, and the electrical charges of the muscles will complete the circuit and tell them if the substance in question is what the individual needs to improve their health.

In the most sophisticated of these “muscle testing” methods, known as Applied Kinesiology (AK), the pressure is applied to the leg of the test subject. The body’s strongest muscle in most healthy people is the quadricep, which is the long muscle on the front of your leg attached between your knee and your hip. A blog is not a textbook and no doubt there are those who will argue with what I’ve written, citing details not disclosed in this blog. However, it is not time efficient to address every detail of every question in this blog.

Generally, individuals studying the science of kinesiology in college will seek jobs as exercise physiologists, occupational therapists, fitness instructors or athletic trainers. You may find these kinesiologist’s working on college or professional athletic teams as well. The number of people trained in the sciences is so small, relative to the total human population, that it is not a statistically significant number. As a result, the overwhelming majority of the human race does not understand the fundamentals of science and the scientific method. This is where I run into my biggest resistance as a science educator. This is also why this theme will be continuously repeated in The Nugent Report in most every educational piece I present. Science is something that you can quantify and yields the same results every time you do it. Art is something that takes the talent and artistic ability of an artist to yield the best results.

I studied different forms of “muscle testing” including AK at a time when I was doing monthly lectures for health practitioners in virtually all allied health fields. I studied these methods along with a host of other areas in various natural health fields so that I could be a better instructor when I spoke with doctors who were using those methods, with the goal of being the best possible instructor I could be. I wanted to know what methods my students were using, how they were doing it, and why they were doing it. As an instructor, there is no substitute for experience. A major aspect of effective communication in teaching comes with firsthand understanding of the subject.

The late Dr. George Goodheart (a Doctor of Chiropractic or DC) was considered the father of AK and he commanded great respect within the chiropractic community. I was fortunate to be able to know him and learn AK from him and some of his top students. Just to be clear, the vast majority of practitioners who use AK are chiropractors, but not all chiropractors do muscle testing and there are practitioners in other fields who do use muscle testing in its various forms. No doubt those certified in AK will have some degree of objection with the simplicity of my explanation, but once again this is a blog not a textbook.

In my experiences, those who believe in muscle testing do so with an almost religious fervor and it simply is not possible (or at least I’ve never found it possible), to convince someone who uses the various forms of muscle testing as a diagnostic tool that it cannot (at this time) be scientifically validated. Those who tell you that it has been scientifically validated simply don’t understand the scientific method. Scientific validation requires that all variables that affect the conclusion of your investigation have been addressed and eliminated before drawing that conclusion, and there is no way at this time to eliminate the potential for psychological influences. I have seen patients with the same issues and the same health questions get two entirely different answers from practitioners using various forms of muscle testing. It is an art, not a science and some practitioners are more artistic than others.

If you listened to my first podcast, then you understand the concept of objectivity and the purpose of my website. An objective thinker does not make value judgments. Science begins with objective gathering of information, objective analysis and objective reporting. In order to determine the validity of something, you need to be able to quantify the results and eliminate all psychological influences that may affect your conclusion. The results must also be consistently repeatable.

After training with the best in the field, I still observed that people were able to psychologically affect results. Regardless, I have found that every time I have made a similar statement to one of those practitioners, the reaction has been a highly charged emotional reaction (sometimes even an angry reaction) from the practitioners as well as their patients. This article may generate emotional responses. Emotional responses result in circular arguments and circular arguments are illogical, so I do not engage in them. Time is too precious. So, I’m not going to say that any form of muscle testing is either good or bad, useful or not, but rather that the results cannot be objectively analyzed and quantified and validated with existing research methods.

The reason it’s done is because those natural practitioners cannot under their licenses, and under the laws of the various states, do traditional medical testing including blood testing for diagnostics or verification of treatment. They need some method to guide them in what they’re going to recommend, and muscle testing is easy. It requires no equipment and is therefore a free tool. This is the primary reason why it is so immensely popular among natural practitioners.

To the best of my knowledge, there has not been a comprehensive objective scientific analysis with a quantification of data to draw a conclusion as to the validity of muscle testing in any of its various forms. Once again, this does not mean it’s invalid, simply that it has not been objectively validated as of yet. As I frequently say to my audiences, “Anything that has not been disproven remains possible.”

Keep in mind that there are millions of scientific studies, and perhaps there is a study that I’m not aware of. A study of this type would require a very large test population, at least hundreds of human subjects with a number of different testing parameters. The muscle testing results would have to be compared to currently validated scientific methods such as blood analysis etc. and the cost of doing this would be enormous. A study of this type would cost hundreds of thousands of dollars minimum and probably be closer to a million dollars. The larger and more complicated a study is, the more expensive it becomes.

Generally, scientific study is either sponsored by companies who are selling a product of some type, such as a pharmaceutical drug, dietary supplement or medical device or it’s a study being done by university researchers who have obtained grants. In the university system, there is a common phrase “publish or perish”. This is one of the reasons that university researchers are always looking for money to do another study and publish as much as they can. To the average person it may seem like there are countless studies that have no value. To the scientist performing the study, of course it’s an important and necessary exercise.

So now you understand what it is, why it’s done, who does it, and the theory behind its use. Bear in mind that objectivity is the purpose of this website and there is no possibility at this time with data and methods that currently exist, for me to tell you that the method is valid or invalid. Remember, “Anything that has not been disproven remains possible.”

Be safe, be sensible, be objective.